I waited in the wings of a stage on a recent Saturday night.  With my hair pulled tightly into a bun under a headscarf and silk flowers bobby-pinned behind my left ear, I paced on tip-toes in my character shoes and worked out some last minute kinks in the steps I was about to perform.  I did not feel chatty, nor did the other dancers waiting with me.  We mimed choreographed steps and sequences.  I am certain some of us were wondering: Why can’t I remember these things the way I used to?

The music started and we queued up, linking hands.  Like old times, tentative expressions turned one-by-one into confident smiles as we emerged from behind the curtain into the glow of stage lights.  Even though it had been two decades since my last time on a stage that size, once in the presence of an audience old habits honed from 400 plus performances with the Duquesne University Tamburitzans took over.  Raised chins, straight shoulders, and bright smiles – stage-ready poise is a reflex for us, the alumni of the longest-running European folkloric dance and music ensemble in the United States.

We performed an eight minute Bulgarian suite of dances – a fraction of the two hour show we once delivered three to four times per week for 46 weeks of the year.  I tripped up a few times – we all did and had a laugh afterwards.  I joked with the others, but thought about how I might have done better.

I remembered something another alum once shared with me – “I never want to be up there on stage when everyone is really thinking that I should have hung up my dancing shoes a long time ago.”  This thought haunts me, too.  Over many months on my quest to master the choreography, I often listed the many reasons why I should quit.  But I know I can’t.  Dance is an anchor, a vehicle of connection to the world before me and my past and future. 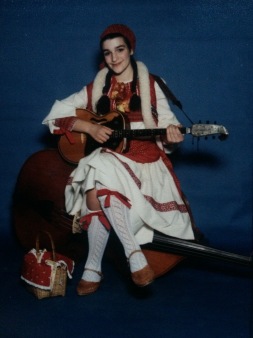 Posing in Croatian Costume at Age 12

I grew up learning the music and dances of my Eastern European ancestors through neatly arranged choreographies and musical scores prepared for stage.  From my freshman through senior year in college, I was a cast member with the Tamburitzans.  I performed songs and dances from at least fifteen different countries.  I mastered learning dances and music very quickly.  The trick was in memorizing choreography.  By the time I graduated, I thought I knew everything. 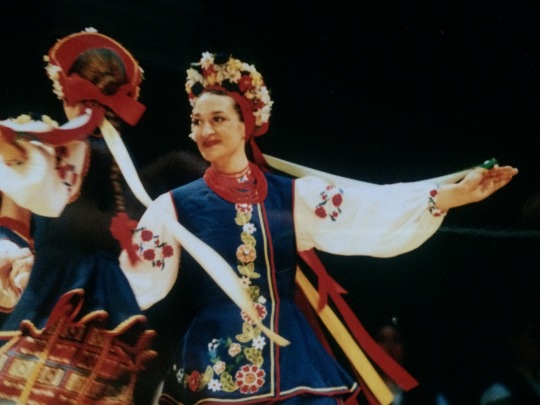 Ukrainian Dancing with the Tamburitzans

In 1999 I traveled to Europe with my boyfriend (now husband) on a folkloric tour through Transylvania.  We visited several village social halls where locals danced to live music.  A few times I was asked to dance and fumbled my way through spins and steps that seemed random and confusing.  After a few attempts, I opted to just watch. The men and women danced in sync and without choreography.  I was stunned that some of the best dancers were old enough to be my grandparents.  I found myself envying those elderly women who could spin like tops, whose knee-high stockings showed as the ends of their skirts flared.  How young, timeless, and free they seemed as they twirled.  I realized that I did not know how to really dance.

After the trip, I moved to Washington, DC to start my first job.  I joined a Hungarian/Transylvanian dance group and started attending dances at a Latin club.  As I learned about roommates, rent, and the demands of working life, I also learned that mastering dance without choreography was no easy feat.  One patient friend summed up my issue: “You have to trust the music and let me lead.  You have to feel the people around you.  Together we will improvise.”

And so rather than focusing on choreography and perfection, I learned a few steps and hand signals and slowly gave in to improvisation.  I stopped counting beats.  I ignored measures. Entranced by music, movement, and connection, there were a handful of times when I felt like my head was separate from my legs and that my body was moving without me.  Never had I felt so free.  I fell in love with dance like never before.

Nearly two decades later and back with my alumni friends, I am bound to choreography again.  I keep dancing, remembering those moments when my mind and body flooded with music and all thoughts were purged.  Thanks to those elderly women in Europe, I believe that as long as my body will allow it, I can dance.  Still I am bothered that I struggle with choreography.  It’s not like riding a bike.

But life is not as staged now as it was when I depended on choreographies to dance.  As a working mother, wife, and writer, improvisation is a way of life.  Once terrified not to know what was coming next, I’ve become mutable and flexible to maintain my balance.  Is it a stretch to say that I can’t learn choreography as easily as I did in my teens and twenties because I am now more than ever in tune with life’s rhythms?

Choreographies are useful and important.  Like a schedule, they provide a framework on which one can sometimes improvise.  I’m not opposed to sticking to them.  So long as they don’t consume me. Because when I stopped counting beats and trying to control everything when I danced, it flowed.  This is the secret of those timeless dancers.  Perhaps this too is the secret of a happy life. 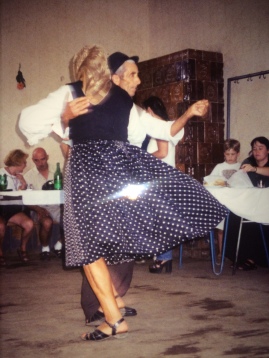